How do rumours get started..

Poor Yardy, there just seems to be so many rumours about the guy, the latest one sent from a yahoo email address to media organisations in Nigeria, claims he will resign after a cabinet reshuffle.

This Day Reports:
"Early yesterday, editors thought they had got the story of the year when a "newsflash" was sent to their e-mail addresses from "Newsagency Nigeria", through newsagencynig@yahoo.com, announcing that "President Umaru Musa Yar'Adua may resign after carbinate[sic] reshuffle, on health grounds".

The local and international broadcast media quickly picked up the story and broadcast it to the whole world. In the euphoria, however, little did it cross the mind why the President would resign after "cabinet reshuffle". Would his new appointments be binding on his successor?
[SNIP]
But Channels TV, which initially broadcast the news, was last night shut down by the State Security Service (SSS) over the hoax.

This is the third significant rumour about Yar'Adua since last year - the first being that he had died in Germany during the presidential campaign. Last month, he was rumoured to have died having gone into "coma" after undergoing a "renal transplant".
http://allafrica.com/stories/200809170012.html

Now i don't know about you, but considering the amount of dodgy email i get (penile enlargements (as if), free Ipods/Iphones, Naked pics of Halle Berry (i wish) etc) I treat any information i receive via email with suspicion especially "official" emails originating from any free email service. "Genuine" spammers don't even use Yahoo, Gmail or Hotmail to send spam anymore, they've left them to your average 419er.

But i digress, i would have thought a reputable organisation like Channels TV would at least confirm the story before going to town with it. How could they fall for such a hoax?, do Nigerian leaders ever resign from office?? if anything, the bad spelling should have made them suspicious. God help us all if someone had sent an email that a coup or something more sinister had happened; imagine the panic and confusion they could have caused.

But can we really blame Channels TV, the same news report reveals that the News Agency Of Nigeria uses Gmail addresses to send out news items.

This Day reports:
"Apparently to forestall the use of web-based e-mails addresses to spread rumours in its name, NAN yesterday sent e-mails to media houses to announce the authentic e-mail addresses of the agency.

NAN will no longer use any yahoo, or gmail, or hotmail.com address from this moment on."
http://allafrica.com/stories/200809170012.html

Good to see that the government's usual "Close the stable door after the horse has bolted" approach to dealing with issues has kicked in...
And if you thought that was the only government organisation that uses free web based email, you should check out the contact page of the Federal Ministry of Finance, one of their contact email addresses is "servicom@yahoo.com".

Meanwhile, isn't it funny the way this government has reverted to the usual tactics of previous administrations (by shutting down Channels TV) i thought Yardy believed in the rule of law? 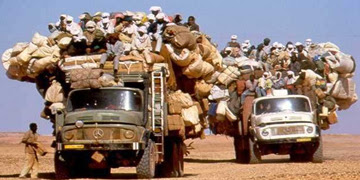 agbero with overload (as my peeps are fond of saying), this whole Obama mania is doing my head in, you can't vist any naija news site without coming across a story or feature on Obama.
I have nothing against Obama, he talks the talk, (not sure if he can back it up with action) I hope he wins the election, but i still don't understand what it has to do with naija, if he becomes the next American President will it make any difference to our country?

I understand if the Kenyans are excited about it, he has family in Kenya but wetin be our own??
even good old reliable SaharaReporters has joined the bandwagon and turned it's front page over to the Democratic party convention in Denver. And don't even get me started on the whole fund raising for Obama ("Africans for Obama") organised by that fat chick with a Ph.D , the shameful spectacle was on Bisi Olatilo's vomit inducing show last weekend. It was too much for my ulcer and I just couldn't bring myself to blog about it. I think i'll need some therapy to forget the shameful scenes of people doing the Obama fist bump aaaaghhhh!!

Meanwhile...
While naija's poke their noses in another country's business, our own el Presidente has been holding us to ransom, if the man dies how will things play out?, will Badluck (there's nothing good about that man's luck) take over or will he be pushed aside using either the Army or the Supreme court???.