Another one bites the dust..

Clearly a 'breeze' of change is blowing across naija, I don't want to get too carried away that's why i did not call it a "wind of change", but anyway sha breeze dey blow small small and so far the main casualties are Etteh (madam speaker finally threw in the towel when the pressure became unbearable - http://news.bbc.co.uk/2/hi/africa/7069654.stm) and her deputy, the governor of Rivers state - Celestine Omehia, Yardy's In law and Kebbi state governor - Usman Dakingari, Kogi state governor - Ibrahim Idris and Anambra state governor - Andy Uba (who was governor for only two weeks. ouch).

so who's next? i bet the following are having sleepless nights:
The six million £££pound man - David Mark
Adedibu's protege and governor of Oyo state - Alao Akala
The governor of Edo state - Oserheimen Osunbor
And the governors of Ekiti, Ondo, Osun, Enugu, Imo and Abia states. (see Anxiety grips governors)

who knows this 'breeze' might even turn into a category 5 hurricane and sweep Yardy himself...

to the HRW report.
The report (see previous post) makes sobering reading and leaves one with not much optimism about the future of the country. The government as usual will dismiss the report and accuse the organisation of trying to portray the country in a negative light.

denial of denial
We may choose to deny the issues raised in the report but our international partners, creditors, risk analysts etc will be taking a critical look at the report and will use it to access the circumstances in which they will do business with the country.

Meanwhile, no one seems to have noticed that the country has now moved up 10 places since last year to 17 on the failed list index (2007), above countries like Sierra Leone (23) and Liberia (27), (which is quite ironic considering the role our troops played in bringing 'peace' to the two countries).

Back in 2005, when CIA's long-term forecast for Africa suggested Nigeria could become a failed state in a couple of years, there was widespread condemnation. Obj (in his usual arrogant way) described the authors as "prophets of doom". He went on to say "If our detractors cannot see our far-reaching reforms, our fight against waste and corruption, the new culture of service delivery that is gradually emerging, the various political reforms... then they must have some dubious or diabolical benchmarks for measuring efforts"

Well thanks to Obj and the 'exceptional legacy' he left behind, the nightmare of a failed Nigeria is a likelihood today...

Criminal Politics - a report by HRW 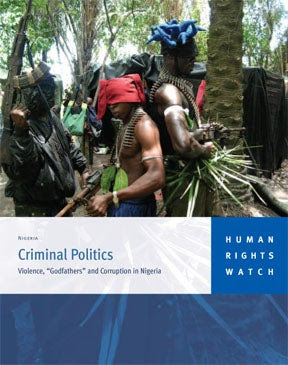 Human Rights Watch has released an extensive report on the political situation in Nigeria,
called Criminal Politics: Violence, “Godfathers” and Corruption in Nigeria
click here for the Pdf version


Highlights from the report:

in Yardy's state (and this was while he was still governor)
Direct State Sponsorship of Thugs in Katsina:
In at least one Nigerian state, Katsina, the state government paid money directly to
gangs of youth who were accused of carrying out widespread political violence in
return for those payments.
Nigerian President Umaru Yar’Adua served as Governor of Katsina State for eight years until being elected president in April 2007. According to former state government officials, civil society activists and PDP Youth members, his administration used state government money to maintain several thousand “PDP Youth” on a regular monthly stipend of N5000 ($38).

One former state government official told Human Rights Watch that this PDP youth organization was essentially a perversion of an initiative to empower unemployed youth in the state:

"Before 2003 the idea was brought at a Government House meeting to establish
television viewing centers in all of the wards. Some of us vehemently opposed this
on the basis that this was not an acceptable legacy to bequeath on the youth. [We]
suggested computer training centers. The idea was accepted but [later] this thing
suddenly became, “Let’s give them a N5000 allowance.” [These youth] have since
become a reservoir of thugs."
-----------------------------------
Akala suggests new career for Adedibu

The following is an excerpt from an interview with Christopher Alao Akala at his
campaign office in Ibadan two months prior to his election as Governor of Oyo State.
Human Rights Watch asked Alao-Akala to explain his relationship with Chief Adedibu
as well as Adedibu’s role in the politics of Oyo State:

"For God’s sake, this man is an old man, you cannot reform him, you can only manage him. This man has been in politics since politics began in Nigeria. Can you just wish him away like that? If you go to his house you will see pictures of all the past leaders he has worked with…

Chief Adedibu has sponsored everybody—everybody who is who and who in Oyo state politics has passed through that place.

This man belongs to an old school of thought. If, for example, he asked me, Mr. Governor, I want you to kill this one tomorrow I would say, “Yes, sir.” Then I would go back the following day and say, “Why do you want us to kill that man?”
Then I will provide another solution— we will not kill him, let us bring him to order. If he asked me for N100, I will say, “Yes, sir.” But then the next day, I will say, “Baba, I am sorry, I
don’t have the N100, here is N20 for you to manage.”
That is only an example.

I will recommend Baba [Adedibu] as a lecturer at the University [of
Ibadan] to teach, to lecture students about practical politics."

"I have been in politics from 1999 and even before, but 2003 is the time I produced a Governor for the State. Since that 2003 I have been handling the party—the PDP—and we have been doing well and we did not have any problem in the party.

I spent a lot of money to put him there but I never asked him for my money back. Ngige was trying to be smart, trying to run the government on his own.…
The problem is Ngige being a politician who did not invest one naira, not even one kobo, wanted to run away with everything and not even share one appointment.

That is why he heaped this blackmail upon me…I cannot tell him to give me N3 billion because I know that he does not have it! The allocation to Anambra in one month is not up to N3 billion!
I am supposed to bring the Commissioner for Finance, this man who funded the campaign is supposed to be Commissioner of Works, I said, look, you signed it, and not under duress.

The problem is the immunity the governors are having, everything they are having, you spend your money to bring them into power and they say “Go to hell.”
It should be just like, you invest in a bank and then you have power to make some decisions because of your controlling shares. But he blackmails you and pays the press to go say all sorts of bad things about you and put it in the internet."

In the annex of the report is a copy of the "agreement" between Chris Uba (Godfather) and the former governor of Anambra state, Chris Ngige.

How to keep your Job (Naija style)

Madam Speaker doing her own version of Amy Winehouse's 'rehab'

So you've been caught with your hands in the till (or in this case indicted for not following due process by awarding a contract to an unregistered company run by one of your aides).
No worries, here are a few tips on how to save your job;

1. The best form of defence is an attack, start by turning the tables on your opponents by accusing them of similar crimes.

2. Play the victim. Claim you've been set up and you know nothing about the allegations.

3. Employ a powerful Godfather to apply pressure on those in power.

4. Now is the time to bring out the GMGs "Ghana must go bags". Ensure you give one to anyone who is in a position to help you (at this stage "Everybody" would like to help you)

5. Play the Ethnic card by getting your "people" to accuse your opponents of trying to marginalise your ethnic group.

6. Employ Spiritual methods. Call on all pastors and imams to pray for you and Nigeria. If you attend a Pentecostal church, you can organise night vigils, prayer requests or make a large donation to your pastor to ensure he is on your case 24/7.

7. Employ other "Spiritual" methods. At times like this you can't rely on 'whiteman's religion' alone, you have to go "local".
If you're from the west, head over to Ijebu Igbo and employ the services of the best 'jazz' (juju) man around. If you're from the east, head over to Okija shrine while those in the north should employ the services of a marabout. (ensure it's not the same one Abacha and Atiku used)

8. Now is a good time to call on the traditional ruler in your part of the country that has the most influence. In the South west, the Oni of Ife is always ready to beg on behalf of any Yoruba subject accused of corruption or coup plotting.

9. Set up a fictional group called "concerned citizens of Nigeria", get the "group" to put out a full page ad in the news papers claiming there is a conspiracy against you. They should also list your "accomplishments" and declare you're the best ***** Nigeria ever had.

10. Employ good old "shakara". Declare that "it's God's will" that you got to your current position and by "God's grace" no one can remove you.

The speaker and her "aides" have launched a major media offensive to ensure she keeps her job when the house resumes later in the month.
In one of the papers yesterday her 'media consultant' accused certain members (members of the "integrity" ??? group) of the house of "bad belle".

Her aide went on to say that "In other lands, the first female Speaker would have become an instant star, to be adored and celebrated, but in Nigeria, detractors are saying "she is a hair dresser, as if Bill Gates, the world's richest man, was not a drop-out from Harvard." He chided Nigerians for not commending the Speaker, who saved the public till millions of naira by refusing to accept hotel accommodation or even collect money in lieu of it."