Good Morning, Ladies and Gentlemen. It's an absolute pleasure to see you all. I am so excited about the opportunity to talk about the development of our country, but I have only a very limited time, so, I will get straight in.

At the dawn of Independence, our country was like a young virgin bride, full of promises and possibilities, our forefathers were overjoyed by the opportunities, but on the wedding night, it was the best man that consummated the marriage. That false start had plagued our country till today.
There are longer any doubts that the 1959 election was rigged, many people at the time suspected this to be the case, but now the Radio 4 programme that you listened to earlier confirmed that suspicion.

So that begs the question, why will anyone want to rig an election, especially our colonial masters on their way out?. When the slave trade came to an end, these guys still needed labour, they devised something even better, colonisation, rather than transport people to a foreign land, why not make them do the work in their own backyard and then send the goods back to the home country.
Ingenious!. There are policy makers constantly at work, making sure that they deal with issues before they become problems.

There were many reasons why the Nigerian Independence election was rigged, but this has brought us a lot of headache. If our colonial masters can so blatantly ignore the wishes of the people of Nigeria, the subsequent governments do not have a reason to have a plan, or setup an agenda, no accountability, nor do they need to perform in order for them to get back into power.

I understand that the Western region was ahead of its time, free education, free healthcare etc. The UK government wanted people they could continue to influence, educating the majority of the country will only lead to more problems.
The 1979 Nigerian election was fought on the same basis, but Awolowo was criticised for that. The UK Labour government since 1997 made Education and health two important policies of their government. Can you see the parallel, nearly 20 years later?. If we followed those policies in 1979, we would be unbeatable right now.

Now, lets give credit where credit is due, two centuries ago the Brits had about 30 million people, yet they managed to colonise almost a quarter of the world. This small island became a world leader because of the dedication of a few people.

Why did we expect them to help us to develop when development will mean less dependence on UK products?.
Imagine, through some fluke, somebody asked the Chelsea Manager to select the Man United team to face Chelsea at the finals of the European cup. I bet Ronaldo, Ferdinald, Van der Saer, or any of the key players will not be in that team, because even though on a good day Chelsea might be able to match Man U, the manager will play safe and go for the second team.
That was the same thing that happened at our "independence", why pick a team likely to give you a good run for your money, when you can pick one that you can surely win against. So, the Brits picked the second team and put the first team in reserve, another ingenious idea.
We have never had our best players in the right places.

On several occasions, I have heard that we were better under colonial rule than the 47 years of independence!!!. What we have failed to do since independence is to turn around the tide.
Several believed that the sleeping giant of Africa was about to take off in the 1970's and 80's, but in reality, it was a case of the jumbo jet crash landing whilst till taxing on the runway. We never made it as far as we thought we would. It just never happened. Now we are dreaming of 2020, but without a 20/20 vision.

Gradually, many of the colonised countries are now developing, do you remember the Vespa based cars that looked like tricycles with engines?. Those cars were the butts of many jokes when we were growing up, but India has now developed new cars on the back of that and recently launched the cheapest car for about $2000.
The Indian company Tata, manufactures cars, it's a massive conglomerate, they now own British Steel. Does anyone know what happened to Ajaokuta steel after we have spent $6b?.

Malaysia was a British colony, but its now classified as a Newly Industrialised country (NIC), they hope to become a fully developed country by 2020.
Does anyone know what happened to Volkswagen Nigeria?. Malaysia now produces Proton cars, apart from the engine. Malaysia also have one of the best medical facilities in the world, many now travel there as medical tourists. That could have been us. Where are all our trained doctors?. They are now dotted across the world. In 2007, Malaysia exported $4.4b worth of palm oil that they originally took from Nigeria. I wonder what we have done with ours?. Palm oil is now a major product, every part of it is used, even the shell.

Let me share some info from the US department of Statistics. Immigrants from Nigeria to the US are likely to be better educated (graduates and post graduates) than the indigenous population, but are more likely to be employed in a manual work.
Now, we need to move on though, time is ticking, the taxi is waiting and we have lost considerable amount of time, 47 years to be exact. In the life of a human being we are now middle aged, tending towards being regarded as a "condemn".

We have the skills, we have resources, we just lack leadership.
The economics of the world is changing. Having capital alone is not enough, you need skills, you need to be unique, you need to be able to distinguish yourself from the crowd.
Development cannot happen in a vacuum, it must be in the context of our social economic base. If our governments don't want to drive this, then, we as individuals must be able to provide leadership. We need to start somewhere, at the moment, we are running away from our own destiny.
We had oil, we blew the money because we were selfish enough not to care whether our neighbours had a meal or not, as long as we drove better cars and had more houses. Most of the jobs created in the UK and the US are created by the private sector.

Traditional economic theorists believe that in order to develop, we need capital, land, machinery, labour etc.
I have news for you, we don't need those things any more. What we need is the right infrastructure and the skills of the people to drive those things forward. We have heard of jobs being off shored to low wage countries. If we have the infrastructure, our people will have jobs.

Lets look at some of the best new companies in the world, Microsoft, Apple, Google, e-bay, facebook, moneysupermarket.com. These companies are now worth billions of dollars. 20 years ago, some of these companies were not even in existence, but today, they are more profitable than GM, Ford and most of the more traditional companies. Dell computers started in a garage, e-bay, because a man's wife could not find what she was looking for etc.

What that tells us is that we do not need to have huge capital, what we need is our brains, highly developed, highly skilled and highly tuned, not to scam people, but to build a future for ourselves and our country. We can definitely help to build our nation. We are helping to build other nations at the moment.

What can we do?.
We can make things better. We can elect not to agree that it is alright to have substandard products, we can agree that there are rules about governance, we can make sure that we support the right people and train our kids not to believe that all they have to do to make it in life is to blindly study. We need entrepreneurs, we need people with ambitions and we need long term goals. No more get rich quick schemes. We must pursue excellence above everything else.

Things can be turned around very quickly and Nigerians are some of the most industrious people, they follow their leaders and if you give them good leadership, the whole country will start buzzing in no time. A formidable force of 130 million people, more than twice the size of the UK population.
The opportunities are endless, we can come together to form partnerships, we can develop ideas, we have the power, we can help to shape the nature of the policies at home, we can channel our energies in providing support for our people.

Let us celebrate people who have the audacity to dream, let us support those trying to make a difference. This is not the time for the green eyed monster. This is the time to come together to become an incredible force. Our thinking must change from being consumers to being producers, from just opening little shops to thinking out of the box.
Consider the impact of IT, consider what will make our lives easier or more convenient, whilst making the best of the resources we have at your disposal. Don't follow the crowd, but follow your dream. Dream big, plan for it and work hard to get it.

Don't be afraid of failure, but just imagine the freedom. Its like learning to drive a car, the freedom to go anywhere is unbelievable.
Lets celebrate the very best, but celebrating all the time without achieving anything is not a way forward. Have less of those "Owambe" parties, save money and invest. Can you imagine if Bill Gate originated from Nigeria, who can guess how many wives and children he would have by now?. Why?

I have been troubled by the fact that the Polish people are now going home. I can't believe this, these guys have been here for 5 minutes and they are already checking out. What is going on?. Also, an average of 200,000 people leave the UK every year for other countries, hang on a minute, the Pols and the Brits are leaving the country, things must be really tough, who is going to manage the economy. Hey guys, I am checking out as well.

May I end by thanking all the speakers and the audience today, especially Dele Ogun, and the rest of the team that have organised these events year after year. I am thrilled about events like this, because it shows that some of you still love our country.

Finally, The "Godfather" Passes On...

"As expected, Adedibu's death has elicited widespread jubilation in Ibadan, a city where the late gadfly sharpened and practiced his thuggish brand of politics. One observer told Saharareporters that people were seen in different parts of the city rejoicing over Mr. Adedibu’s demise."

These are interesting times.... 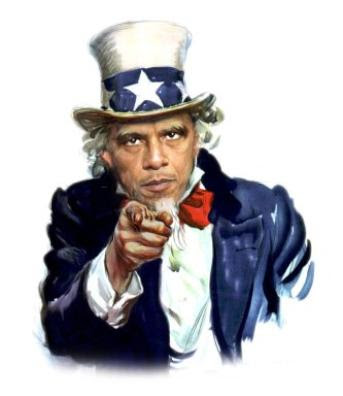 A new Uncle Sam?
Well, well, well, so Barack Obama is now the Democratic party nominee, assuming Hilary doesn't kill him before November : - ), he might actually become the next President of the United States.
Real life is gradually turning into an episode of the TV series 24, what will the Season finale be?
It seems America is finally growing up and ready to bury its racist past....

So what have we learned so far;

Don't fuck with the Clintons, they'll do absolutely anything to win.

Black is the new White

And finally, the ultimate proof that you don't have to Anglicise your name to make it, Fellow Naijas please take note, you don't have to give your offspring "Christian" (i.e "English") names to fit in.
If Barack Hussein Obama was Naija, the Barack would have become "Barry" by now, and his middle name "Hussein" would have disappeared along with any trace of his African roots.